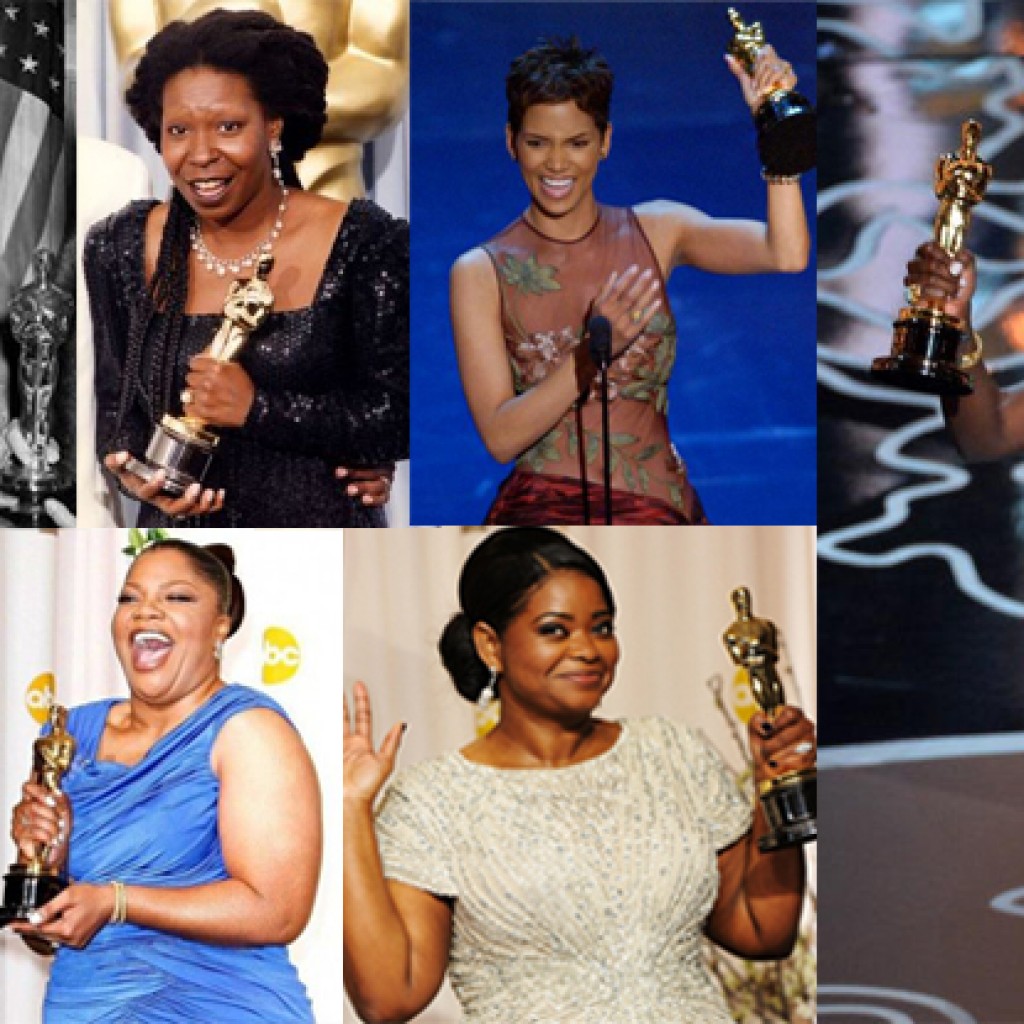 The Oscars ceremony will be on 28th March in the US. This ceremony aims to reward “excellence in the cinema industry” and yet, numerous protests continue regarding the absence of black actors nominations this year. Finding a job in Hollywood is not easy for them. The movie industry prefers black actors to play in servile, demeaning and vulnerable roles. On the other side of this, African Americans who play leading and strong roles rarely receive recognition. There is occasionally an Oscar nomination, but they rarely win. Black actresses in particular, win Oscars for stereotypical roles with historical associations of black women. Here are the Oscar winning black actresses and the role they play:

Hattie McDaniel became the first black actress to win an Oscars for her role of a mammy in Gone with the Wind.

Likewise, this is a stereotypical image of black women. They are overweight, obedient servants who love, nurture, and are loyal to white people. It is very common in American society. This is one of the images that has gone on to shape the image white people have of black women today. Between 1890 and 1920, the mammies appear in books, magazines, advertising and films. You can see them on restaurant menus and cookbooks and advertising a variety of products such as salt and cookie jars.

The mammies history as the protective carers of white children is important to the southern United States. The attention focuses in particular on their bodies, such as the big chest descriptions and being fat as a source comfort and support.

The role of “Mammy” is a stereotype that depicts African American women as a servant figure. This reflects the female slaves in the South before the war. Mammy figures are obese, dark skin, kind women who are desexualised. Their caring role transcends age and is the only essence of who they are.

Yet there is no other way to describe it. Therefore, the first African American actress to win an Oscar, was for a role depicting servitude and slavery.

In 1990, Whoopi Goldberg won an Oscar as a supporting actress for Ghost in playing Oda Mae Brown. She is a psychic running a scam. Her purpose is to support a white couple at centre stage and entertain the audience with sass talk.

This is not to criticise Whoopi Goldberg; she is one of my favourite actresses and her performance in this film is masterful. However, the comic features and character trickery reflect historical stereotypes of African Americans. This stereotype is the most degrading of all black stereotypes ruling African Americans. Namely as a figure of the clown or less than human. Accordingly, it is a shame that she does not receive recognition for her strong female leads in other films.

In 2001, Halle Berry is the first African American actress to win the Oscar for Best Actress. In Monster’s Ball, Halle Berry plays the role of Leticia, a poor alcoholic woman. Furthermore, she is the wife of a murderer sentenced to the death penalty.

In this case, I do not think that Halle Berry was deserving of the Oscar. Her performance is not as good as the other competitors. As such, I also wonder why excellent actresses Dorothy Dandridge and Angela Bassett with past nominations, did not achieve success. Was her win of the gold statue due to the post-September 11 effect? Or was it her jezebel role, a stereotype that depicts Black women as promiscuous and over-sexualized temptresses? The answer is not clear.

This stereotype was a creation during slavery. Tragically, it was common for female slaves to be raped during the time, and the men had a need to validate this action. They began to label these women as women of easy virtue. This gave a justification of their brutal act and they made it into something that was not rape. They changed the narrative to be that the woman was wanton and wanted this sexual act and deserved it.

In the film, the character of Halle Berry has sex with a white racist prison guard who supervises the execution of her husband. This is by far one of the crudest sexual scenes of any American cinematic production. Previous to this, actress Angela Bassett, turns down the role of Leticia. In an interview, she shares that: “I was not going to prostitute myself in a movie. I could not do that because it’s a stereotype about black women and their sexuality.” She notes that a film is forever. Consequently, it should be something you will be proud of ten years from now as it will still be in the public eye.

In 2006, Jennifer Hudson wins the Oscar for Best Actress in a Supporting Role, for her portrayal of Effie White in the musical film Dreamgirls. It is based on a true story. Effie White is the leader and the best singer of her group, a sassy woman with a strong personality and diva attitudes.

Early in the film, the character may be seen as someone very assertive, argumentative and defensive. In the same way, this reflects the stereotype of the “SAPHYRE” or the stereotypical “angry black woman”. At the end of the film, viewers realise that Effie just wants to take control of her own destiny and identity. Her anger and frustration are fed by discrimination of her physical appearance. She does not meet a white dominant idea of beauty and womanhood. She is very much a victim.

Next, in 2009, Mo’Nique wins the Oscar for Best Supporting Actress for her portrayal of Mary Lee Johnston in the film Precious. Mary is an unemployed mother who lives on social benefits. She embodies an abusive and lazy black mother who is proud to belittle her child. She does not to let anyone or anything affect her eligibility to receive government assistance, which is at the forefront of her mind. This notion of black women as lazy and feeding off society is a common racial prejudice. Again, this film feeds that societal stereotype of what a black woman might be.

Octavia Spencer won the Oscar for Best Supporting Actress for the role Minny Jackson, an outspoken black maid in The Help. Although Spencer’s performance is masterful, it is still a stereotypical role. Due to its historical context, this is a typical role African American women take up in society at that time. African American women seem only to get recognition in Hollywood when they play demeaning roles.

Finally, Lupita Nyong’o  Oscar for Best Supporting Actress of 2014 is for the role of a slave experiencing abuse by her master. For the first time in cinema, Lupita shows the horror of the way female slaves are made to live. This is raw and honest. She is not the main character but she totally steals the show.

In this role, Lupita is extremely vulnerable and desperate. She frequently faces rape and beatings to the point of losing consciousness. The scenes are shocking and hard to watch. But Hollywood still prefers this kind of servile character for black people.

Why does the cinema industry reward black actresses for only these kind of roles? Is it a way to consolidate an idea of racial superiority?

The media, including movies, have a strong influence on people’s knowledge and prejudices. It can affect the representation of a whole group of people. As such, rewarding black women with an Academy Award for roles that are tied to clichés and stereotypes continue to reinforce negative representations.

How can Hollywood change this? First of all, there needs to be opportunities for black actresses in exceptional films. Yet, even where black women are given strong roles, they are not necessarily singled out for praise. Likewise, Hollywood needs to identify films that show black women making the most of their potential, in positive roles. In fact, take Hidden Figures which shows three exceptional black women making historical yet hidden impact in space science, facing discrimination for their race and sex. The three main actresses are all stunning, yet only Octavia Spencer received a nomination as Best Supporting Actress. As such, Taraji P. Henson put up an impressive performance as Katherine Johnson. Yet the nomination for Best Actress was not there. Hollywood take note – these black actresses will keep coming to ruffle your very white feathers until you show them their just rewards.